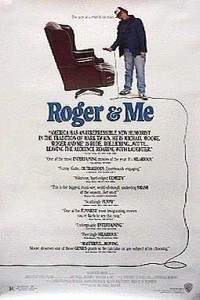 Roger and Me is a loose, smart-alecky documentary directed and narrated by Michael Moore, an everyman host with a devastating wit and a working-class pose. When his hometown is devastated by the plant closure of an American corporate giant (making record profits, one should note), the hell-raising political commentator with a prankster streak tries to turn his camera on General Motors Chairman Roger B. Smith, the elusive Roger of the title, and the film is loosely structured around Moore's odyssey to track down the corporate giant for an interview.
While Moore ambushes his corporate subjects like a blue-collar Geraldo Rivera, a guerrilla interviewer who treasures his comic rebuffs as much as his interviews, his portraits of the colorful characters he meets along the way can be patronizing. The famous come off as absurdly out of touch (Anita Bryant appears for some can-do cheerleading, and hometown celebrity Bob Eubanks tells some boorish jokes), and the disenfranchised poor (notably an unemployed woman who sells rabbit meat to make ends meet) all too often appear as buffoons or hicks. But behind his loose play with the facts and snarky attitude is a devastating look at the victims of downsizing in the midst of the 1980s economic boom. This portrait of Reagan's America and the tarnish on the American dream comes down to a simple question: what is corporate America's responsibility to the country's citizens? That's a question no one at GM wants to answer